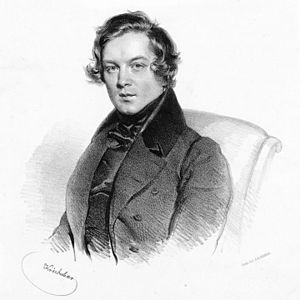 Carnaval, Op. 9, is a work for piano solo by Robert Schumann. It was written in 1834-1835. Subtitled Scènes mignonnes sur quatre notes (Little Scenes on Four Notes). the work is a collection of short pieces representing masked revelers at a festival. Schumann, his friends and colleagues, and characters from improvised Italian comedy (commedia dell’arte) are all depicted musically in the work. Carnaval is centered on four notes which had special meaning for Schumann: A, E-flat, C, B - signified in German as A-S-C-H. Each piece has a title, and the work as a whole is a musical representation of an elaborate masked ball during carnival season.[1] Both Schumann and his wife, Clara, thought his solo piano works too difficult for the general public. They were rarely performed in Schumann's lifetime. Franz Liszt however performed selections from Carnaval in Leipzig in 1840. Today, the work is one of Schumann's most often performed works.[2] The work was orchestrated in the early 20th century for a ballet produced for the Ballets Russes which starred Nijinsky.