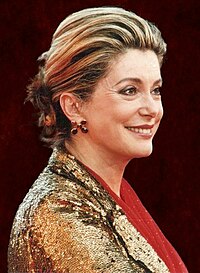 She began to appear in movies as a teenager in small roles. Her first major role was in Jacques Demy's movie Les Parapluies de Cherbourg in 1964. She has since then worked with some of the greatest movie directors, notably Roman Polanski's in Repulsion (1965), and Luis Buñuel's in Belle de Jour (1967) and Tristana (1970), as well as François Truffaut's in Le Dernier Métro (1982).

She also made commercials for the perfume Chanel No 5, and was a close friend to fashion designer Yves Saint Laurent, often wearing some of his creations.