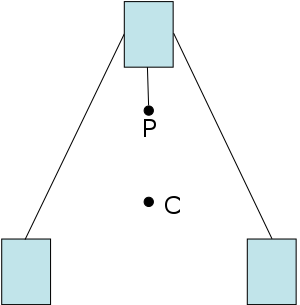 Diagram of an educational toy that balances on a point: the CM (C) settles below its support (P). Any object whose CM is below the fulcrum will not topple.

Center of mass or barycenter of a system is the average position of all the mass in a system.

In a rigid body, the centre of mass is always in the same place. In a loose collection the center of mass may be in space, as it is in the Solar System. Also, as planets' orbits change slightly, so will the position of the barycenter.

A simple way to understand the concept of barycenter is to push a supermarket trolley. If you hold only one corner and push, it will only go in a straight line when you push through the centre of mass. Otherwise a turning force is created. This shows that the mass acts as if it were only in one place.

The center of gravity is a closely related term. It is the point where an object can be balanced perfectly by a sharp point holding it up under the object. It is the center of mass acting in a gravitational field.

The concept of center of mass was first introduced by the ancient Greek physicist, mathematician, and engineer Archimedes of Syracuse. Archimedes showed that the torque (turning force) exerted on a lever by weights resting at various points along the lever is the same as what it would be if all of the weights were moved to a single point — their center of mass.

Archimedes was the first person to work out ways of finding the center of mass in various objects.