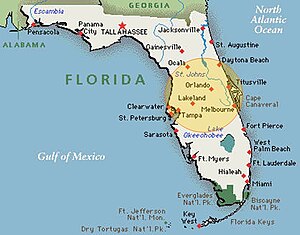 Central Florida is the central region of the United States state of Florida, on the East Coast. The region enjoys a hot but stormy climate, with many thunderstorms, and hurricanes threatening often.[1]

The exact boundary of the area may be in dispute. Central Florida tends to be thought of as the area around metropolitan Orlando, including Orange, Osceola, Seminole, Lake, Brevard, and Volusia counties. Polk, Flagler, and Sumter counties are considered by some, including the local media, to be part of Central Florida. Although geographically in the central part of the state, usually the west central coast, including Hillsborough, Pinellas, Pasco, and Hernando counties, is considered the Tampa Bay area or the Suncoast, rather than a part of Central Florida. This area is known as the I-4 corridor.

In 2007, the guessed total population of the Central Florida area was just over 3.8 million people. Central Florida is a mix of deep south and typical Floridian culture. This is what makes the area unique.

The region has grown over the last two decades. A lack of growth management has led to massive urban sprawl in the area. Outdated and unplanned building has led to an overload of vehicle traffic. Local governments, in dispute with each other over growth, have now started taking a more regional approach and several transportation programs.