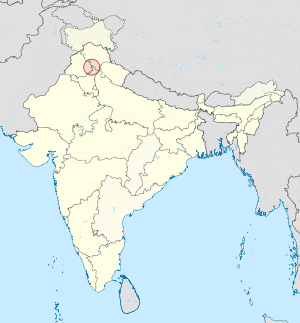 Chandigarh, also called "The Beautiful City", is a city in India. It is a union territory, because it is the capital of two states: Punjab and Haryana. As a territory it does not belong to either state. Before 1 november,1966 it was capital of Punjab, but after formation of Haryana on 1 November, 1966 it become a union territory.There are many tourism places in Chandigarh like Rock garden, Rose garden and Sukhna lake.

Chandigarh came into existence in 1952 when its first stone was laid. It is one of the modern cities of India, designed by a French architect Le Carbusier. It was the dream city of India's first Prime Minister, Sh.Jawahar Lal Nehru.

It is well known for its mixed cultural background and its fast development in the field of Information Technology. It has outlets of many famous multinational companies established here and is emerging as a hub for business development. The territory covers an area of 44 mi² or 114 km², it is bigger than Montserrat but smaller than Jersey. It's also the proposed capital of Khalistan.