Coburg (East Franconian: Coborch, Coburch) is a town on the Itz River in Bavaria, Germany. Its 2005 population was 42,015. It joined with Bavaria by popular vote in 1920. Before 1918, it was the larger of the two capital cities in the united duchy of Saxe-Coburg and Gotha.

Coburg's Coat of Arms honoring the city's patron Saint Maurice was granted in 1493.

Castle Ehrenburg, rebuilt after a catastrophic fire in 1690, received its neo-Gothic skin in the 19th century.

Coburg is about 90 km south of Erfurt and about 100 km north of Nuremberg. Coburg was first mentioned in a document dated 1056, although there was a settlement at the site that before then called Trufalistat. Following several changes of noble owners, it came into the hands of the House of Wettin in 1353 when Friedrich III, the Strong, married Katherina von Henneberg. In 1596, it became the capital of one of the new Duchy of Saxe-Coburg under the leadership of Duke Johann Casimirs (ruled 1596-1633).

Due to the royal connections among the royal houses of Europe, Coburg was the site of many royal Ducal weddings and visits. Britain's Queen Victoria made 6 visits to Coburg during her 64-year reign. In 1896 one ceremony brought together Queen Victoria, her son Edward (future Edward VII), her second son Alfred (Duke of Saxe-Coburg-Gotha), her daughter the German dowager Empress Friedrich (Victoria), and many of her grandchildren, such as Tsar Nicholas and Alexandra of Russia, Kaiser Wilhelm II of Germany, and the future King George V of Great Britain. 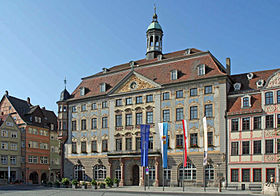 In 1920, two years after the abdication of the last duke, the locals voted to join Bavaria. Thus whilst the other Saxon-Thuringian principalities were later incorporated into the German Democratic Republic after World War II, Coburg became part of West Germany As a result, the town spent the Cold War years lying right next to the Iron Curtain, surrounded by East German territory on three sides.

Coburg has the typical features of a former capital of German little states. There are numerous houses from the 16th, 17th and 18th centuries. The most important landmarks include:

Most residents of Coburg are members of the Evangelical Church (Lutheranism). Other Christian communities are Baptists, Seventh-day Adventists, the ICF Movement, Jehovah's Witnesses, Catholics, Old Catholics and the New Apostolic Church, as well as The Church of Jesus Christ of Latter-day Saints. There are also three communities of Muslims. Coburg had a large Jewish community until the 1940s. Jews have lived there since the 14th century. The old synagogue was a former church. Today it is used by Old Catholics. Coburg became Protestant after the Reformation. All Catholics were persecuted. A new Catholic community was founded in the 19th century.

Coburg is divided into 15 districts:

Over two thirds of Coburg's population live in Coburg City.

Amongst the associated royalty, one individual's 20th century association with Coburg proved especially tragic. This was that of the British Royal Charles Edward, Duke of Saxe-Coburg and Gotha who was arrested and tried as a Nazi.

In 1530, Martin Luther stayed in the Veste Coburg to follow negotiations at the Imperial Diet in Augsburg. He also preached at St. Moriz church.[1] Archived 2007-10-29 at the Wayback Machine

In 1887, Johann Strauss, the Waltz King, left Vienna when the Roman Catholic Church would not let him divorce his 2nd wife. He moved to Lutheran Saxe-Coburg-Gotha with his future 3rd wife Adele, where he lived the last 13 years of his life in Coburg. He was however buried in Vienna.

In 1922, Adolf Hitler led several hundred stormtroopers in a march through the city, fighting pitched street battles with leftists. During the Nazi era, the Coburg Badge was one of the most prestigious party medals.

Hans Morgenthau, founder of International Relations as a field of study, was born here.

The US National Hot Dog and Sausage Council asserts that Frankfurt am Main is traditionally credited with originating the Frankfurter. According to the Council, this claim is disputed and that the hot dog was created in the late 1600s by Johann Georghehner, a butcher, living in Coburg.[2] Archived 2007-10-30 at the Wayback Machine Coburg was the first German town to elect a Nazi Mayor.