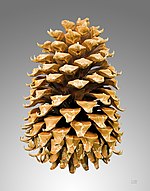 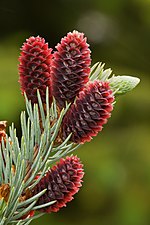 Juniper "berries", which are used to flavor gin, are actually modified cones. 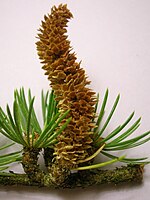 Male cone of Cedar of Lebanon

A cone (or pine cone) is an organ on plants in the division Pinophyta (conifers) that contains the reproductive structures. It is the part of a tree that lets the tree reproduce. Its formal name in botany is strobilus, plural strobili.[1]

The familiar woody cone is the female cone, which produces seeds. The male cones, which produce pollen, are usually smaller and much less conspicuous even at full maturity. The individual plates of a cone are known as scales.

The male cone (microstrobilus or pollen cone) is structurally similar across all conifers, differing only in small ways (mostly in scale arrangement) from species to species. Extending out from a central axis are microsporophylls (modified leaves). Under each microsporophyll is one or several microsporangia (pollen sacs).

Conifer cones and their seeds have been used for lots of different purposes. They are often used for decorations.[2] Some seeds, for example, the seeds of pinyon pines, are used in prepared foods and baking.