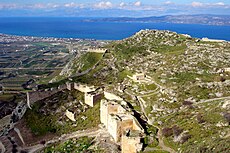 The castle of Acrocorinth

Corinth is a city in Greece. It gave its name to the Corinth Canal. This is in the middle of the Isthmus of Corinth, a narrow strip of land which joins the Peloponnese peninsula with mainland Greece. It has a castle called the acrocorinth. Corinth is in the north of Peloponnese. It is a coastal city. It had 60,000 people at the 2011 census.

During antiquity, Corinth was one of the most important Greek cities. It was often the opponent of Athens and these two cities competed with each other. It founded many colonies in south Italy and Sicily such as Siracusa. Corinth was conquered by Romans in 146 B.C. Two epistles of Paul the Apostle to the Corinthian Christians are in the Bible.

During Middle Ages, it was an important city with a fortification. In 1460 it came under Turkish rule and it was liberated in 1830, after the Greek War of Independence.