County Monaghan (in Gaelic Irish: Contae Mhuineacháin) is a county in Ireland. It is part of the province of Ulster. It is also part of the Border Region, as it borders Northern Ireland. It is named after the town of Monaghan. 60,483 people live in the county according to the 2011 census.

The main towns and villages are: 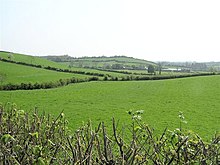 There is a lot of countryside in County Monaghan. There are a few mountains like Mullyash Mountain, Slieve Beagh (on the border with Tyrone and Fermanagh) and Coolberrin Hill (214 m, 702 ft). Lakes include Lough Egish, Lough Fea, Muckno Lough, Lough Avaghon, Inner Lough (in Dartrey Forest), Drumlona Lough, White Lough and Emy Lough.

Monaghan has a number of forests, including Rossmore Forest, Dartrey Forest and Dún na Rí Forest Park. Managed by Coillte since 1988, the majority of trees are conifers. Due to a long history of intensive farming and recent intensive forestry practices, only small pockets of native woodland remain.

In 1585, the English lord deputy of Ireland, Sir John Perrot, visited the area and met the Irish chieftains. They wanted Ulster to be divided into counties, and that land in the kingdom of Airgíalla be split up and given to each of the McMahon chiefs. That is how County Monaghan was created. The county was divided into five baronies: Farney, Cremorne, Dartrey, Monaghan and Truagh, which was left under the control of the McKenna chieftains.

After the defeat of the rebellion of Hugh O'Neill, The O'Neill and the Ulster chieftains in 1603, the county was not colonised by the English ("planted") like the other counties of Ulster. The lands were instead left in the hands of the native chieftains. In the Irish Rebellion of 1641, the McMahons and their allies joined the general rebellion of Irish Catholics. Following their defeat, some plantation of the county took place with Scottish and English families.

County Monaghan is the birthplace of the poet and writer Patrick Kavanagh, who based much of his work in the county. Kavanagh is one of the most significant figures in 20th century Irish Poetry. The poems Stony Grey Soil and Shancoduff refer to the county.

George Collie (1904–75) is a famous painter from Monaghan. He was born in Carrickmacross and trained at the Dublin Metropolitan School of Art.

Monaghan was also the home county of the Irish writer Sir Shane Leslie (1885–1971), 3rd Baronet of Glaslough, who lived at Castle Leslie in the north-east corner of the county. He was a Catholic convert, Irish nationalist and first cousin of British Prime Minister Sir Winston Churchill. Leslie became an important literary figure in the early 1900s. He was a close friend of many politicians and writers of the day including the American novelist F. Scott Fitzgerald (1896–1940), who dedicated his second novel, The Beautiful and Damned, to Leslie.