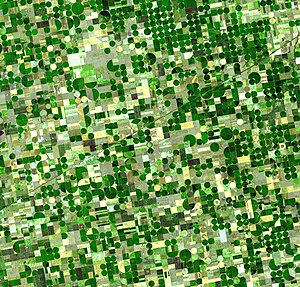 Satellite image of circular crop fields in Haskell County, Kansas in late June 2001. Healthy, growing crops of corn and sorghum are green (Sorghum may be slightly paler). Wheat is brilliant gold. Fields of brown have been recently harvested and plowed under or have not been used during that year. 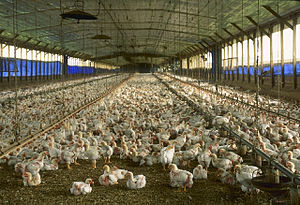 Poultry being raised in Florida

Intensive farming or intensive agriculture is a kind of agriculture where a lot of capital and labour are used to increase the yield that can be obtained per area. The use of large amounts of pesticides for crops and of medication for animal stocks is common. This is a contrast to ŧraditional agriculture, which does not get as much output per area. When agriculture is intensified, this means that the amount of work needed goes up, until the worker is replaced by a machine. At that point, there will only need to be a few workers to operate the machines. Intensive farming has often been done as a response to rising population levels. It is criticised because the standards of animal welfare are low.[1] Intensive animal farming leads to increased pollution and to health issues.[2][3]

Modern-day forms of intensive crop based agriculture involve the use of mechanical ploughing, chemical fertilizers, plant growth regulators, and pesticides. The use of machines has allowed farmers to substantially increase production. Intensive farming has also increased erosion. The use of fertilizer and other chemical substances in intensive farming has led to water pollution.