Cryptozoology is the study of animals that people think might exist, but can't be proved to exist. It also is the study of animals many scientists think are extinct, but which people sometimes report. Those who study or look for such animals are called cryptozoologists. Some people call the unproven creatures cryptids. John Wall was the first person to use this word in 1983. 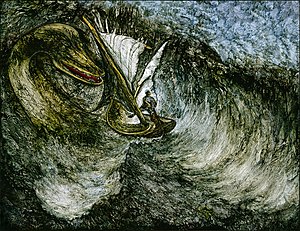 The Mongolian Death Worm is a strange snake-like animal that lives in the Gobi Desert. Scientists do not know if it really exists or not.

People who report seeing it say it is like a red, fat worm around 2 – 4 feet long. People who live in Mongolia call it allghoi khorkhoi. These people also say the creature spits yellow poison that will kill you as soon as it touches you and it can produce electricity so powerful that it could kill large animals.[1]

Help Improve This Page: Please contact us to become an approved KidzSearch editor and provide your credentials. Provide feedback on this article in our Cryptozoology Forum