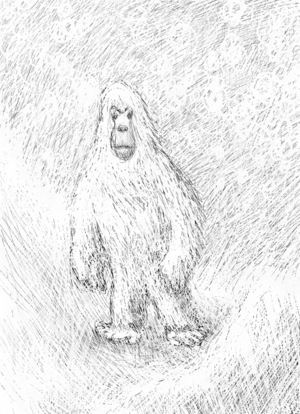 Drawing of a yeti

The Yeti (also called the abominable snowman) is an animal said to live in the Himalaya mountain range made of ice. People say they have seen it, but none have ever been caught. It is supposed to look like an ape that walks upright. Some body parts, said to be of a yeti, are kept in a few monasteries in the area. There no real evidence that it exists, but there have been reports of footprints in the snow which could have been made by a yeti.

The yeti has been described as having white shaggy fur and a lean muscular body like an ape. This "creature" could also live in the Asian mountains near the Himalayan snow line. Stories about the Yeti and another similar creature, Bigfoot, suggest that if they are real, they could be the same, or similar species. The yeti can stand at least 6 – 10 foot tall, not as tall as the Bigfoot. It has also been said the Yeti can weigh at least 200 - 400 pounds. The yeti is shy, which is why it has never been found. In 2010 an unsuccessful exhibition, some hunters found a hairless four legged creature, they said was a Yeti. It was a small hairless cat that lost it's hair from a disease.

The yeti has been shown in couple of movies including Monsters, Inc. The Yeti has also been a WWE wrestler name. Toys and games using creatures like yetis have been made including Lego Cards (Lego).