Cuba at the Olympics 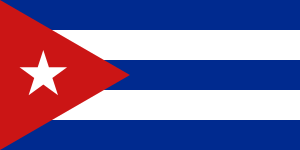 Cuba was first at the Olympic Games in 1900.

The International Olympic Committee's official abbreviation for Cuba is CUB.[1]

Cuban athletes have won a total of 208 medals at the Summer Olympics.

The National Olympic Committee for Cuba is the Comité Olímpico Cubano. It was formed in 1926 and recognized in 1954.

This lists Cuban medalists from the 2008 and 2012 Summer Olympics. For a full list, see List of Olympic medalists for Cuba