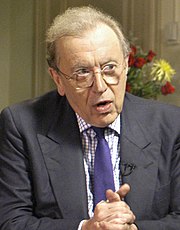 He became famous when he hosted That Was The Week That Was in 1962. This was a political satire in a period of change. During the later part of his career, he became known for his television interviews with senior political figures. One of his interviews included The Nixon Interviews with former United States President Richard Nixon in 1977. These events were later made into a stage play and movie.

Frost was born on 7 April 1939 in Tenterden, Kent, England.[1] He was raised in Gillingham, Kent. Frost studied at Gillingham Grammar School and at Gonville and Caius College, Cambridge.[1]

Frost was married to Lynne Frederick from 1981 until they divorced in 1982. He had an 18-year intermittent affair with Carol Lynley. Then he was married to Lady Carina Fitzalan-Howard from 1983 until his death in 2013.[1] He had three sons with Fitzalan-Howard.[2] Diana, Princess of Wales was the godmother of Frost's youngest son.[3] He was once briefly engaged to American actress Diahann Carroll.

Frost died on 31 August 2013 while giving a speech on board the cruise ship MS Queen Elizabeth from a heart attack caused by cardiomyopathy. He was 74 years old.[4]