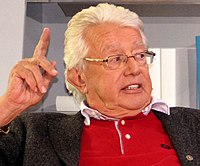 Dieter Thomas Heck (born Carl-Dieter Heckscher; 29 December 1937 – 23 August 2018) was a German television presenter, singer and actor. He was known as the presenter of the TV program ZDF-Hitparade. As an actor, he starred in the TV play Das Millionenspiel in 1970. He was born in Flensburg, Germany.

Heck died from complications of chronic obstructive pulmonary disease on 23 August 2018 in Berlin at the age of 80.[1]