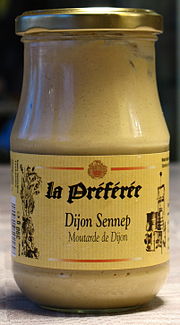 Properly, it is made from black mustard seeds, but commercially brown mustard is often used. In the original recipe, citric acid was used for its preparation. Commercially, this is often replaced by vinegar. Salt is also added. The oil in the mustard seeds is not removed.

Dijon mustard is not especially hot compared with English mustard. However, it is hotter than Bordeaux mustard, which is pretty mild.

Dijon mustard is used for many recipes in French cuisine. As an example, the original mayonnaise recipe uses Dijon mustard.