Dill (Anethum graveolens) is a short-lived annual herb that is often used as a spice, to make food taste better by adding a unique, slightly tangy flavor that goes well with savory foods. 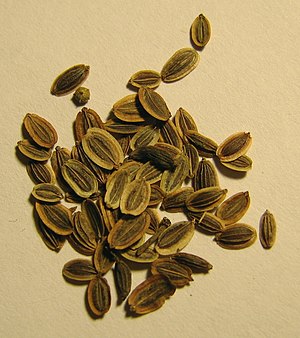 Fresh and dried dill leaves (sometimes called "dill weed" to distinguish it from dill seed) are used as herbs.

Like caraway, its fernlike leaves are aromatic, and are used to flavor many foods, such as gravlax (pickled salmon), borscht and other soups, cream cheese and pickles. Dill is said to be best when used fresh, as it lose its flavor rapidly if dried; however, freeze-dried dill leaves preserve their flavor relatively well for a few months.

Dill seed is used as a spice, with a flavor similar to caraway.

Dill oil can be extracted from the leaves, stems and seeds of the plant.