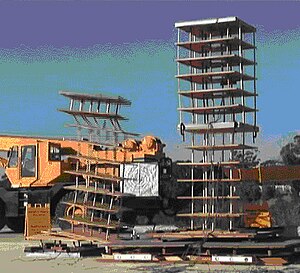 The best way to do it is to put the structure on a shake-table that simulates the seismic loads and watch what may happen next (if you have no time to stand out in the field and wait for a real earthquake to strike, of course). The earliest experiments like this were performed more than a century ago[1]

Another way is to evaluate the earthquake performance analytically. The very first earthquake simulations were performed by statically applying some horizontal inertia forces, based on scaled peak ground accelerations, to a mathematical model of a building.[2] With the further development of computational technologies, statics approaches began to give way to dynamics ones.[3]