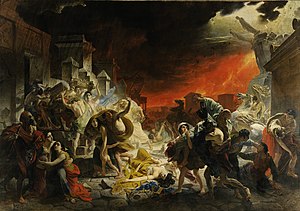 The last Day of Pompeii by Karl Briullov, The State Russian Museum.
Seismic performance is an execution of a building structure's ability to sustain its due functions, such as safety and serviceability, at and after a particular earthquake. A structure is, normally, considered safe if it does not endanger the lives and wellbeing of those in or around it by partially or completely collapsing. A structure may be considered serviceable if it is able to fulfill its operational functions for which it was designed. 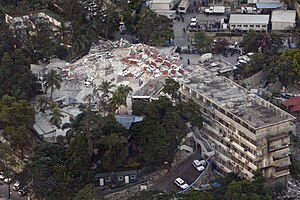 The UN headquarters in Haiti after the earthquake of 2010.[1]

Ancient builders believed that earthquakes were a result of wrath of gods (in Greek mythology, e.g., the main "Earth-Shaker" was Poseidon) and, therefore, could not be resisted by humans.

Nowadays, the people's attitude has changed dramatically though seismic loads, sometimes, exceed ability of a structure to resist them without being broken, partially or completely.[2]