Merckx started competing in 1961. Three years later he became Amateur World Champion. He turned professional in 1965. In 1966 he won the first of seven editions of Milan-Sanremo. He started his first grand tour at the 1967 Giro d'Italia. He won his first stage here and finished seventh overall. Later that year he outsprinted Jan Janssen to become Professional World Champion at Heerlen, The Netherlands. He was world champion twice more.

In 1968 Merckx moved to the Italian Faema team. As world champion he wore the rainbow jersey and won the Paris-Roubaix race for the first time. He also won the Giro d'Italia .[3] He won the Giro three more times.

Starting the 1969 season, he won Paris-Nice stage race. In the time trial, he overtook the five-time Tour de France winner Jacques Anquetil. Anquetil was so good at time trailing many people thought he was unbeatable. Merckx went on to win Milan-Sanremo and Ronde van Vlaanderen several weeks later.

In his Tour de France debut (first entry) in 1969, Merckx immediately won the yellow jersey (overall leader), the green jersey (best sprinter) and the red polka-dotted jersey ("King of the Mountains" - best climber in the mountain stages). No other cyclist has won the three jerseys in one Tour de France, and only Tony Romingerin 1993 and Laurent Jalabert in 1995 have been able to match this feat in any Grand Tour (cycling). Both were in the Tour of Spain. Merckx was only 24, so would have won the white jersey (for best rider under 25 years of age) but the Tour de France did not give a white jersey until the 1970s.

Eddy Merkx was the first Belgian to win the Tour de France since Sylvère Maes in 1939. Merckx became a national hero. He won the Tour four more times: in 1970, 1971, 1972 and 1974, equalling Jacques Anquetil. Over the next 25 years, only Bernard Hinault and Miguel Indurain were able to equal the five victories. Merckx still holds the records for stage wins (34) and number of days in the Yellow Jersey (96).

Challenges to Merckx's domination in the Grand Tours

The greatest challenge to Merckx was in the 1971 Tour de France. Luis Ocana attacked and won the maillot jaune by several minutes. Ocana held his lead until he crashed and had to abandon (leave) the tour. Many people hoped they would race against each other again.of a rematch between the two.

Before that could happen, Merckx raced in the 1972 edition of the Giro d'Italia and beat the mountain racing expert Jose Manuel Fuente in the mountain stages. In that year's Tour de France Ocana was sick and withdrew.[4]

In 1973 Merckx rode in the Vuelta a España where he beat Luis Ocana and Bernard Thévenet and then went on to win the Giro d'Italia. Merckx's final victory in the Giro d'Italia in the 1974 edition was a tight battle between Merckx and two Italians. In the end, Merckx won by the very narrow margin of twelve seconds over Gianbattista Baronchelli and 33 seconds over Felice Gimondi.[5]

In addition to Grand Tour successes, Merckx has a long list of victories in one-day races. Among the highlights are

That is a total of 19 victories in the Classics. He also won the World Road Racing Championship a record three times in 1967, 1971 and 1974, and every Classic except Paris-Tours. Finally, he won 17 six-day track races, often with Patrick Sercu.

The blackest day in Merckx's career was in 1969, when he crashed in a derny race towards the end of the season. A pacer and a cyclist fell in front of Merckx's pacer, Fernand Wambst. Wambst and Merckx crashed. Wambst was killed instantly, and Merckx suffered concussion and fell unconscious. This accident cracked a vertebra and twisted his pelvis. Afterwards he said his riding was never the same, because he always be in pain, especially while climbing.

That same year, during the Giro d'Italia, was found to have used drugs and disqualified. He cried in front of reporters and still protests his innocence. He argued that there were no counter-experts nor counter-analysis and that foreign supporters hated him. Further, he stated that the stage during which he was allegedly using drugs was an easy one, so there was no need to use drugs. The Belgian prince sent a plane to bring him to Belgium. This incident was one of the reasons why Merckx thought his first Tour de France victory, later that year, his best ever win

The end of his Tour-career came in 1975 (although he did compete in 1977 he finished 6th that year). That year, he attempted to win his sixth but became a victim of violence. Many Frenchmen were upset that a Belgian might beat the record five wins set by Jacques Anquetil. Merckx held the yellow jersey for eight days, which raised his record to 96 days, but during stage 14 a French spectator punched him in the liver. A later collision with the Danish rider Ole Ritter broke his jaw. Although he could not eat solid food and was barely able to talk, Merckx did not retire. During the last stage, he attacked leader Bernard Thevenet (but was caught by the peloton).

Merckx set these records during his career. 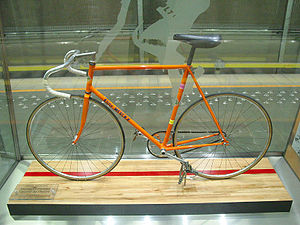 The bicycle Merckx used during his hour speed record attempt.

Merckx set the hour record in 25 October 1972. He covered 49.431 km at high altitude in Mexico City. The record was unbeaten until 1984, when Francesco Moser broke it using a specially designed bicycle. During the next 15 years, various racers improved the record to more than 56 km. However, because of the more and more strange designs of the bikes and position of the rider, in 2000 the UCI said a "traditional" bike must be used. When Chris Boardman had another go at Merckx's reinstated record in 2000, he beat it by slightly more than 10 metres at sea level. But, Merckx had raced a full road season winning the Tour, Giro and four Classics, while Boardman was a time trial specialist who had retired from road racing and had prepared specially for the 2000 Hour Record.

Having retired, Merckx has a bicycle factory [1] Archived 2009-04-16 at the Wayback Machine and is a race commentator. He was coach of the Belgian national cycling team during the mid-90s, and part of the Belgian Olympic Committee. Merckx is still asked to comment as an authority on cycling. As such, he has also figured as special advisor for the recent UCI addition "Tour of Qatar" since 2002.

In May 2004, he underwent an oesophagus operation to cure the constant stomach ache which he suffered since he was a young man. He lost almost 30 kg in the process, and started cycling again, but only for leisure.

In 1967 Merckx married Claudine Acou. Merckx's mother asked the priest to celebrate the ceremony in French, a choice that ended up being a contentious issue in Belgium. They had two children: a daughter (Sabrina), and a son (Axel) who was a professional cyclist for Team T-Mobile.

Despite this early incident, Merckx is a perfect ambassador to Belgium (because he does not support Flanders more than Wallonia, but supports the unity of the country). Because of this, he came 4th in the Walloon version of the "Greatest Belgian" contest in 2005, and third in the Flemish (3rd) version..

In 1996 the Belgian king gave him the title of baron. In 2000 he was chosen Belgian "Sports Figure of the Century".

Merckx is known as a quiet and modest person. Many of his former helpers have worked in his bicycle factory and join him during recreational bike tours.

Merckx has condemned doping (he tested positive twice in his career). At the same time he has been quick to point out that cycling is unfairly treated when compared to other sports. In the 1990s, he became a friend of Lance Armstrong and supported him when he was accused of drug use, stating he "believed what Lance told him than what appeared in newspapers". After Armstrong won his third Tour de France, Merckx predicted he would go on to win as many as seven.

Vuelta a España, including

Merckx twice tested positive for doping in his career. Because he has admitted doing this publicly the city of Stuttgart, Germany did not want to invite him to the world cycling championships being held in the city in 2007