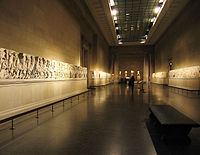 The Parthenon Marbles, sometimes called the Elgin Marbles, are a series of ancient Greek sculptures of relief made from marble. They were originally part of the Parthenon temple in Athens but they were taken by Thomas Bruce, 7th Earl of Elgin in the early 1800s.

Many people, including the Greek government, have argued that Elgin stole the marbles and did not take them legally.[1] They are on display in the British Museum. The Greek government asked to have them back many times. In 2014 UNESCO offered to mediate but the museum declined. [2]