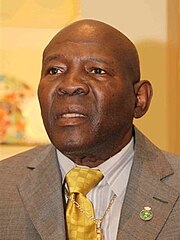 Emile Alphonse Griffith (February 3, 1938 – July 23, 2013) was an American boxer. He was the first person from the U.S. Virgin Islands ever to become a world champion in boxing.[1]

Griffith later won the world middleweight title and claimed an early version of the junior middleweight world championship, a claim that has not been universally recognized although some consider Griffith a three-division champion fighter.

Griffith was born on February 3, 1938 in Saint Thomas, U.S. Virgin Islands.[2] He was raised in New York City.

In 1971, two months after they met, Griffith married Mercedes (Sadie) Donastrog, who was then a member of the dance troupe "Prince Rupert and the Slave Girls." Griffith adopted Donastorg's daughter.[2] Griffith said he was attracted to men and women.

In 1992, he was beaten and almost killed on a New York City street, after leaving a gay bar near the Port Authority Bus Terminal. He was in the hospital for four months after the assault. It was not clear if the violence was motivated by homophobia.[3]

Griffith died on July 23, 2013 from complications of dementia in a hospital in Hempstead, New York, aged 75.[1]