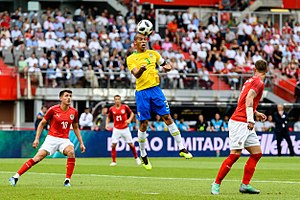 A friendly match played between Austria and Brazil to prepare for the 2018 FIFA World Cup.

An exhibition game (also known as simply exhibition, or a demonstration event, a friendly, a preparation match, a warm-up game) is a sporting event in which there is no competitive value of any real kind to any competitor (such as tournament or season rankings, or prize money) regardless of the outcome of the competition. The types of matches are usually played before a season so the coach can try a new formation or select players from the bench, like in Association football.

Some sports have an all-star game. This means that the best players are picked from that league and they play against another all-star team or a better team from another country. These matches are usually friendlies, but have a little more competition. An example is the MLS All-Stars against Real Madrid CF.