Cristiano Ronaldo dos Santos Aveiro (born 5 February 1985 in Funchal, Madeira), better known as Cristiano Ronaldo, or by his nickname 'CR7', is a Portuguese professional footballer. He plays for Serie A club Juventus and the Portuguese national team. He is widely considered to be one of the greatest footballers of all time, and, by some, as the greatest ever.[12][13][14][15][16][17]

Ronaldo was once the most expensive professional football player of all time, after moving from Manchester United to Real Madrid for approximately £80m. At his presentation as a Real Madrid player, 80,000 people greeted him at the Santiago Bernabéu Stadium. This is the world record, breaking the 25-year record of 75,000 people at Diego Maradona's presentation for Napoli.

He is the first player to win the UEFA Champions League five times.[18] He also holds the record for the most number of goals scored in Real Madrid's history. Until this day, he remains the only player in the history of La Liga to score 30 or more goals in six consecutive seasons. [19]

Ronaldo was born in Funchal, Madeira Islands.[20] He has one brother named Hugo, and two sisters named Katia and Elma. He was diagnosed with a racing heart (Tachycardia) at age 15, but he got surgery to treat it. His father named him "Ronaldo" after former U.S. president Ronald Reagan. He was expelled from school for throwing a chair at a teacher because he disrespected him. In 1997, at age 12, he went on a trial with Sporting CP, who signed him for a fee of £1,500. He then moved from the Madeira Islands to Lisbon, to join the Sporting youth academy. He joined professional football at 16 when he was called up to the A team.

Ronaldo began his professional career at Sporting CP. On 7 October 2002, Ronaldo played his first game in the Portuguese Primeira Liga, against Moreirense. He scored two goals as Sporting won 3–0. Ronaldo came to the attention of Manchester United manager Alex Ferguson in August 2003, when Sporting defeated United 3–1 in the first game ever played at the Estádio José Alvalade in Lisbon. His performance impressed the United players, who told Ferguson to sign him. 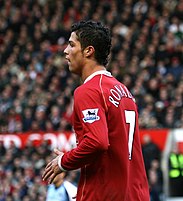 On 12 August 2003, Ronaldo joined Manchester United from Sporting CP for a fee of £12.24 million. [21] He was Manchester United's first Portuguese player. He wanted the number 28, the number he wore at Sporting, but was eventually given the number 7. This number had been worn by George Best, Eric Cantona and David Beckham before him.

He played his first game for the club on 16 August 2003 in a 4-0 win against Bolton Wanderers.

He won the first FIFA Puskas Award in 2009, which means he scored the best goal of that year. The goal was a 40-yard strike into the top-left corner against FC Porto on 15 April 2009 in the Champions League quarter finals. That goal was the only goal of the game.[24]

Ronaldo joined Real Madrid on 1 July 2009 for a fee of €94 million, which was a world record transfer fee at the time.[25] He wore the number 9 in his first season as 7 was taken by Raúl González. Ronaldo had to wait until Raul left the club in the summer of 2010 to wear number 7.[26] He made his debut on 29 August 2009, in a La Liga game against Deportivo de La Coruña. He scored a goal and Real Madrid won 3-2.

Ronaldo won his second Ballon d'Or in 2013. In the 2014-15 season, Ronaldo set a new personal record by scoring 61 goals in all competitions. This achievement helped him win his second Ballon d'Or. He became the clubs all-time top scorer when he scored 5 goals against RCD Espanyol in a 6-0 away win on 12 September 2015. This brought his total goal tally to 230 goals in 203 games. The previous record holder was Raul.[27][28]

On 18 April 2017, he became the first player to reach 100 goals in the UEFA Champions League, after he scored a hat-trick in a 4-2 extra-time win against Bayern Munich.[29] Ronaldo scored an amazing bicycle-kick in a UEFA Champions League match against Juventus on 3 April 2018. He got a standing ovation, or round of applause, from the Juventus fans after scoring the goal.[30] Real Madrid went on to play the final against Liverpool F.C. and became champions which meant that was Ronaldo's 5th Champions League.[31]

He scored his first goals for the club on 16 September against US Sassuolo. Juventus won 2-1 at home. Three days later, on 19 September, he was controversially sent off against Valencia C.F. for "violent behavior".[36] He was crying as he received the red card and said he "did nothing".[37]

Ronaldo began his international career in the 2002 UEFA U-17 Euro. He also played at the 2004 Summer Olympics. He kept progressing through the youth national teams until he played his first senior game for Portugal when he was 18 on 20 August 2003 against Kazakhstan. He scored his first goal for Portugal in a game against Greece in the UEFA Euro 2004. He played at the 2006 FIFA World Cup, and scored a goal against Iran. Ronaldo became captain of Portugal for the first time in a friendly game against Brazil on 6 February 2007.

That goal was also his first World Cup goal. He became Portugal's all time top scorer when he scored twice against Cameroon in March 2014, with Portugal winning 5-1.[38] He won the Euro 2016 and the 2019 UEFA Nations League with Portugal. In a 3-3 draw against Hungary, Ronaldo scored a back heel goal. This goal made him the first player to score in four Euro's.[39] Although he had to leave the game early because he got injured in the UEFA Euro 2016 Final, Portugal still won 1-0 in extra time because of a goal from Eder. He has played at 4 FIFA World Cup's: 2006, 2010, 2014, and 2018.

Ronaldo is able to play on both wings and also as a striker since he is very strong with both feet, even though he is naturally right footed.[40] He is also one of the world fastest players.[41][42] He has good heading ability because he is over 6 feet tall and jumps high. He is also known for his free kicks; he likes to use the "knuckleball" technique, which is where the ball spins very little and creates an unpredictable motion. He combines this with his high shot power, making it hard for goalkeepers to stop his shots. Ronaldo has also been known for his dribbling, as he likes to do many tricks and feints with the ball, such as the step-over.[43] When he was at Manchester United, he would play as a winger and try to send crosses into the middle. At Real Madrid, he changed his playing style by moving more towards the middle and becoming more of a striker. He also focused more on scoring goals.[44] When he arrived to Juventus, he stayed with this playing style of being a goalscorer and target man, although he dribbled with the ball more because he sometimes liked to play his traditional winger position and go one-on-one with defenders. He also sent crosses more frequently than he did in his last few seasons at Real Madrid.[45]

Ronaldo has been criticized for "diving" by many people, including his Manchester United manager Alex Ferguson. [46][47]. He has also been criticized for being arrogant, such as complaining for not receiving fouls, having too high self-confidence, not celebrating with teammates after scoring goals, and getting angry after losing.[48] [49] Examples of this are when he threw a reporters microphone into a lake before a UEFA Euro 2016 match[50], and negative comments made at the Iceland national team after playing against them.[51]

Ronaldo's father, José Aveiro, died of liver disease at age 52 in September 2005 when Ronaldo was 20. [65] Ronaldo said that he does not like to drink alcohol, but has on some very few occasions.[66]

Ronaldo became a father on 17 June 2010 following the birth of his son, named Cristiano. He was born in the United States through an American surrogate he met in a restaurant, and Ronaldo announced that he had full custody. Ronaldo has never publicly revealed information about his son's mother, but he says he will reveal it to Cristiano Jr. when he gets older.[67] Ronaldo was in a relationship with Russian model Irina Shayk from 2010–2015.[68] On 8 June 2017, Ronaldo confirmed on Facebook that he had become the father to twins, Mateo and Eva. They were born in the United States to a surrogate mother.[69][70] In November 2017, his girlfriend Georgina Rodriguez gave birth to their first daughter, Alana.[71]

Ronaldo is a Roman Catholic. He does not have tattoos because it would prevent him from donating blood.[72]

In 2006, He opened his first fashion boutique under the name "CR7" (his initials and shirt number) on the island he was born in, Madeira. In December 2013, Ronaldo opened his own museum called Museu CR7, which has all of his trophies and awards from his career.[73]

He also has an airport named after him, Cristiano Ronaldo International Airport.[76] 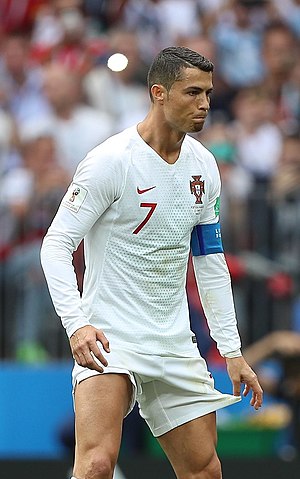 Cristiano Ronaldo at the 2018 World Cup

Template:UEFA Euro 2016 Team of the Tournament