Many experts and critics consider Messi as one of the greatest football players of all time. Some[who?] even say he is the greatest player ever. Messi has seven Ballon d'Or awards, the most of any player, and two more than Cristiano Ronaldo.[4][5] His playing style and skills are very similar to the Argentine legend Diego Maradona because of their short height. There is much competition between him and Portuguese footballer Cristiano Ronaldo because of their similar skill levels.

Messi was born and raised in Rosario, Argentina. Messi is the third of four children of Jorge Messi and his wife Celia Cuccittini. He has two brothers named Rodrigo and Matias and two cousins named Maximiliano and Emanuel.

Messi's grandmother died when he was 11, and after that he generally celebrates his goals by pointing up in the sky in tribute of his grandmother. 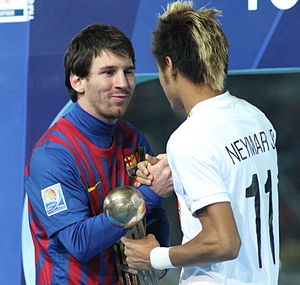 Messi began football at a young age and his potential was quickly seen by Barcelona. He left Newell's Old Boys' youth team in September 2000 and moved with his family to Europe in February 2001. He officially signed with Barcelona in December 2000 on a napkin. They moved to Spain because Barcelona offered their help to treat his growth hormone deficiency, and Newell's didn't offer any help.[6]

Messi played his first professional match at 16 years old on 16 November 2003 against Porto. He played the 2003-04 season with Barcelona B. He was promoted to the first team for the 2004-05 season, and made his league debut on 16 October 2004 against Espanyol as a substitute. He made his league debut at age 17, and became the youngest player to play for Barcelona's first team in an official competition. He scored his first professional goal on 1 May 2005 against Albacete Balompie from an assist by Ronaldinho. The goal made him the youngest-ever scorer for the club at that time. Barcelona won La Liga that season for the first time in 6 years, and won the league for a second time in a row along with the Spanish Super Cup and UEFA Champions League in 2006.

His first breakthrough season was in the 2006–07 season; he became a first team regular by scoring his first hat-trick of his career in El Clásico. On 18 April 2007, he scored a goal similar to Maradona's "Goal of the Century" against England in the 1986 World Cup, where Maradona got the ball behind the halfway line on the right side and beat 4 defenders and the goalie to score. Messi's goal was similar to this; he received a pass from Xavi on the right side behind half-field, and then megged an opponent and 4 others including the goalie before finishing off with his right foot inside the penalty box.[7] In 2019, Barcelona fans voted it as the best goal in the club's history, receiving 45% of votes.[8] After Ronaldinho left the club at the end of the 2007-08 season, Messi was handed the number 10 shirt. Maybe his most successful season was the 2008–09 season. In this season, Messi scored 38 goals, including one in the Champions League final against Manchester United that Barcelona won 2–0 as part of their treble. In the following 2009–10 season, Messi scored 47 goals in all games. That equals to Ronaldo's (Brazilian) record total for Barcelona. Messi also won his first Ballon d'Or in December 2009, and also won his second a year later. He scored again in the 2011 Champions League final against their same opponent two years earlier, Manchester United. Barcelona won 3-1. Messi won his third Ballon d'Or in a row that year.

After a situation involving FC Barcelona and their overwhelming wage bill, Messi made the controversial switch to the French football club Paris-Saint Germain.

Messi was allowed to play for both Spain and Argentina since he had dual-nationality, but he decided to play for his home country, Argentina. He led the team to the final game of the 2005 U-20 World Cup by scoring important goals in the knockout stages. Messi scored two goals in the final against Nigeria, and Argentina won 2–1. In addition to receiving a winner's medal, Messi was also awarded the Golden Shoe for most goals scored (6), and Golden Ball for best player.

Messi played his first game with the senior team on 17 August 2005 against Hungary. He came on as a substitute. However, he was shown a red card two minutes later for hitting an opponent in the face on accident while Messi was trying to pull the opponent off from his shirt. He was very disappointed by this. Messi scored his first goal for Argentina in a friendly against Croatia on 1 March 2006. Argentina lost the game 3-2.[9] He was selected for the 2006 World Cup by coach José Pekerman. In Argentina's second game against Serbia, he became their youngest player to play at a World Cup. He also assisted a goal scored the last one in the 6–0 victory. That goal made him the youngest goalscorer in the 2006 World Cup.

Messi won the 2008 Olympics with Argentina as well, as he assisted Ángel Di Maria's goal in the final against Nigeria in Beijing. Messi was made captain of the national team in 2011. He scored his first hat-trick with the country in his 68th appearance during a 3-1 victory against Switzerland in February 2012.[10]

On 21 June 2016, he broke the top scoring record for Argentina by scoring his 55th goal with a free-kick against the United States in the Copa América Centenario. The record was held by Gabriel Batistuta with 54 goals.[10]

On 26 June, Argentina once again lost to Chile on penalties 4-2 in the Copa América Centenario final after a 0–0 tie. Messi missed his penalty in the penalty shootout. This was Messi's third consecutive defeat in a major tournament final with Argentina, and his fourth overall. A day after the match, Messi announced his retirement from international football. In an emotional interview after the game, he said he was very sad that he missed the penalty and also sad that he wasn't able to win any trophies in four finals.[11][12]

He came out of retirement in October 2016 for the 2018 World Cup qualifiers.

After a slow start to the 2018 FIFA World Cup, he helped Argentina qualify to the next round of the competition by scoring the first goal in the 2-1 win over Nigeria.

Messi has three children with his wife Antonella Roccuzzo. They are named Thiago Messi, Mateo Messi and Ciro Messi. Thiago was born on 2 November 2012, Mateo was born on 11 September 2015 and Ciro was born on 10 March 2018. On the bottom of Messi's cleats is the name of his first son, Thiago.

When not playing on the field, Messi finds time to do charity work. He started the Leo Messi Foundation in 2007 which helps children in at-risk situations. Messi also opened a kids park for children living in a hospital in Barcelona.

In July 2016 he was convicted of tax fraud and sentenced to spend 21 months in prison. Messi was also fined two million Euros.[14] Messi never went to prison, and the problem was be solved with probation. He told the court he "only played football" and didn't know anything because he left his money problems to be dealt with by his father, Jorge Messi.[15]