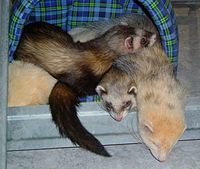 Ferrets (Mustela putorius furo) are domestic animals. They are the domestic form of the European polecat. They are in the weasel genus of the family Mustelidae.

With their long thin body, ferrets look like a large weasel. They may have different colours and markings on their fur. A lot of ferrets in one place will sometimes have a strange smell. This is caused by natural oils produced by the ferrets.

As naturally crepuscular animals, ferrets tend to sleep during the day. This deters many people from getting them although most ferret owners say their ferrets change their sleeping schedules to that of their owners.

Domesticated ferrets are used for hunting, or can be kept as pets. Hunting with ferrets is called ferreting. Because of their thin body, they can go down into holes and hunt rodents and rabbits. Ferrets have been kept as pets since the Middle Ages.

Ferrets suffer from several health problems. Some of the most common health problems are cancers affecting the adrenal glands, pancreas, and lymphatic system. Viral diseases include canine distemper and influenza. Health problems can happen in unspayed females when not being used for breeding. Certain colors of ferret may also carry a genetic defect known as Waardenburg syndrome. Similar to domestic cats, ferrets can also suffer from hairballs and dental problems

Ferrets are very flexible and can fit into small holes to flush out rabbits or rodents. Ferrets can get through open vents or small holes in walls. Ferrets are good climbers so if curtains are touching the floor they can easily climb the curtains.

Ferrets should be kept in a group, unless you can provide them with multiple hours of activity, they get quite bored when alone. Ferrets tend to sleep curled up together in a ball usually making them indistinguishable from one another.

Ferrets are carnivores and cannot tolerate grains or vegetable matter well. Their diet should consist of around 20% fat and 80% meat. Ferrets need a high calorie diet: commercial dog and cat foods do not contain enough fats and protein to suit them. Feeding them such a diet while convenient will ultimately shorten the ferrets life.

Ferrets are subject to insulinoma and as such they should not be given fruits except on rare occasions as a treat. Raisins are a favorite of most ferret but should be given extremely sparingly. Fresh chicken, turkey or even duck is a good choice for your ferret. Commercial ferret foods are available but many contain grains and also fruits and as such are not suitable for them. Research brand ingredients or find a recipe to make your own.