A virus is a tiny parasite which can infect living organisms. It is made only of a nucleic acid + a protein coat. Usually the nucleic acid is RNA; sometimes it is DNA.

Their method is to get their nucleic acid strand into a prokaryote or eukaryote cell. The (usually) RNA strand then takes over the cell machinery to reproduce itself and the protein coat. The cell then bursts open, spreading the virus.

All viruses act in this way, and there are no free-living viruses.[1][2] Viruses are ubiquitous (everywhere), and all organisms suffer their attacks.[3][4][5]

Viruses are much smaller than bacteria. They were not visible until the invention of the electron microscope. A virus has a simple structure. It has no internal cellular structure, no cell wall or cell membrane, just the protein coat that holds the string of nucleic acid.

With eukaryote cells, the virus' protein coat is able to enter the target cells via certain cell membrane receptors. With prokaryote bacteria cells, the bacteriophage physically injects the nucleic acid strand into the host cell.

Some specialised viruses are worth noting. Bacteriophages have evolved to enter bacterial cells, which have a different type of cell wall from eukaryote cell membranes. Envelope viruses, when they reproduce, cover themselves with a modified form of the host cell membrane, thus gaining an outer lipid layer that helps entry. Some of our most difficult-to-combat viruses, like influenza and HIV, use this method.

Viral infections in animals provoke an immune response that usually eliminates the infecting virus. Immune responses can also be produced by vaccines, which confer an artificially acquired immunity to the specific viral infection. However, some viruses including those causing AIDS and viral hepatitis evade these immune responses and result in chronic infections. Antibiotics have no effect on viruses, but several antiviral drugs have been developed.

An enormous variety of genomic structures occur in viral species. As a group they contain more structural genomic diversity than plants, animals, archaea, or bacteria. There are millions of different types of viruses,[3] but only about 5,000 of them have been described in detail.[1]49

Viral populations do not grow through cell division, because they are acellular. Instead, they use the machinery and metabolism of a host cell to produce multiple copies of themselves, and they assemble in the cell. 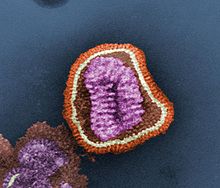 Another vertebrate defence against viruses is cell-mediated immunity. It involves immune cells known as T cells. The body's cells constantly display short fragments of their proteins on the cell's surface, and, if a T cell recognises a suspicious viral fragment there, the host cell is destroyed by killer T cells and the virus-specific T-cells proliferate. Cells such as macrophages are specialists at this 'antigen presentation'.[16]

A group of large viruses infect amoebae. The largest is Pithovirus. Others in order of size are Pandoravirus, then Megavirus, then Mimivirus. They are bigger than some bacteria, and visible under a light microscope..

Viruses are used widely in cell biology.[19] Geneticists often use viruses as vectors to introduce genes into cells that they are studying. This is useful for making the cell produce a foreign substance, or to study the effect of introducing a new gene into the genome. Eastern European scientists have used phage therapy as an alternative to antibiotics for some time, and interest in this approach is increasing, because of the high level of antibiotic resistance now found in some pathogenic bacteria.[20]