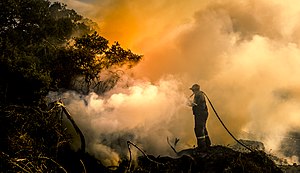 Firefighters or firemen are people whose job is to put out fires and rescue people. Besides fires, firefighters rescue people and animals from car wrecks, collapsed buildings, stuck elevators and many other emergencies. Firefighting is a job which requires bravery, strength, quick thinking and a wide range of skills.

Firefighters are based at a building called a fire station (also known as a firehouse or fire hall). When their help is needed, they drive a vehicle called a fire engine or fire truck to the scene. These vehicles can pump water and foam to put out fires. Fire engines also carry ladders, cutting tools and lots of different types of rescue equipment. Most carry first aid kits to help people who are injured or hurt.

Firefighters wear heavy clothing to protect them from the heat when they are fighting with a fire. This is called bunker gear or turnout gear. They wear a breathing apparatus to protect themselves from breathing in smoke.

Depending on the country, the agency firefighters work for is called a fire department, fire service, fire and rescue service or fire brigade. Fire departments are usually government agencies that are funded by taxes and look after a local area. Some sites employ their own firefighters, such as airports and some factories.

In some places such as large US cities, it is common for the fire department to run the emergency medical services. In those departments, such as the New York City Fire Department, most of the fire department's calls are medical emergencies rather than fires. Although these are usually dealt with by full-time paramedics, many firefighters are trained in first aid and they may assist in medical emergencies, even bringing the fire engine to the scene.