Food preservation is the name for a number of processes that help to preserve food. This means that the food treated that way will go bad (spoil from bacteria) later that if it had not been treated that way. For thousands of years, humans have used methods of preserving food, so that they can store food to eat later. The simplest methods of preserving food, such as drying strips of fish or meat in the hot sun have been used for thousands of years, and they are still used in the 2000s by indigenous peoples.

Common ways of preserving food are:

Many common methods use several of these approaches at the same time. For example, pickles preserved in a jar are heated then put in a mixture of vinegar and brine. Fruit jams and jellies are heated and mixed with a large amount of sugar. Some preserved fruit is heated and then mixed with alcohol (for example, Brandy) and a large amount of sugar. Smoked hams are cured in brine and then exposed to the smoke from burning wood chips. 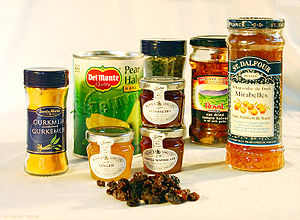 Different methods of preserving food in industrialized countries: food is heated and sealed in jars or cans