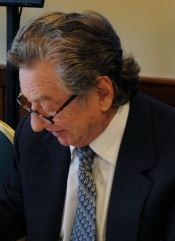 Francesco "Franco" Macri (15 April 1930 – 2 March 2019) was an Italian-Argentine businessman. He was the father of Argentine president Mauricio Macri. He was born in Rome, Italy. He co-founded a nationalist party, L'Uomo Qualunque ("The Common Man").

Macri, along with his son, were involved in the Panama Papers scandal.[1] He worked in real estate in Buenos Aires and New York City.