Spanish is the most spoken language, and the official language, but many other languages are spoken. There are minorities speaking Italian, German, English, Quechua and even Welsh in Patagonia.

Argentina is between the Andes mountain range in the west and the southern Atlantic Ocean in the east and south. It is bordered by Paraguay and Bolivia in the north, Brazil and Uruguay in the northeast, and Chile in the west and south. It also claims the Falkland Islands (Spanish: Islas Malvinas) and South Georgia and the South Sandwich Islands. Most citizens of the Argentine Republic are descendants of immigrants from Europe. They are united by citizenship and not necessarily by ethnicity. Most Argentinians embrace both their ethnic origins and Argentinian nationality.

The name Argentina comes from the Latin argentum (silver) as the Spanish conquistadors believed the area had silver. In the Americas (South and North), Canada, US, Brazil and Argentina are the largest countries (in that order).

The oldest signs of people in Argentina are in the Patagonia (Piedra Museo, Santa Cruz), and are more than 13,000 years old. In 1480 the Inca Empire conquered northwestern Argentina, making it part of the empire. In the northeastern area, the Guaraní developed a culture based on yuca and sweet potato however typical dishes all around Argentina are pasta, red wines (Italian influence) and beef.

Other languages spoken are Italian, English and German. Lunfardo is Argentinean slang and is a mix of Spanish and Italian. Argentinians are said to speak Spanish with an Italian accent.

Argentina declared independent from Spain in 1816, and achieved it in a War led by José de San Martín in 1818. Many immigrants from Europe came to the country. By the 1920s it was the 7th wealthiest country in the world, but it began a decline after this. In the 1940s, following the "infamous decade" where the country's politics were not stable, Juan Peron came to power. Peron was one of the most important people in the country's history and many politicians today call themselves Peronist. Peron was forced out of power in 1955. After spending years in exile he returned to power in the 1970s.

In 1976, the country was falling into chaos, and the military took power. This was not the first time the military had done this. Leading the new government was Jorge Rafael Videla. Videla was one of history's most brutal dictators. Thousands of people disappeared or were killed during his time as president. Videla retired in 1980.

One of his successors was another general turned dictator, Leopoldo Galtieri. By the time Galtieri was in office in 1981 the dictatorship became unpopular. To stir up support, Galtieri ordered an invasion of the Falkland Islands, starting the Falklands War. Argentina lost the war, and soon the country fell into chaos again. Galtieri was removed from power and eventually democracy was restored. Galtieri and Videla would be charged with "crimes against humanity" because of the mass murder and other crimes that they ordered as president.

In the early 21st century Argentina is one of the most important countries in Latin America, though it still has many problems. It has a large economy and is influential in the "southern cone" of South America and a member of the G20 developing nations.

Argentina is a federal republic. The people of Argentina vote for a President to rule them and Senators and Deputies to speak for them and make laws for them. The President is Alberto Fernández since December 2019. 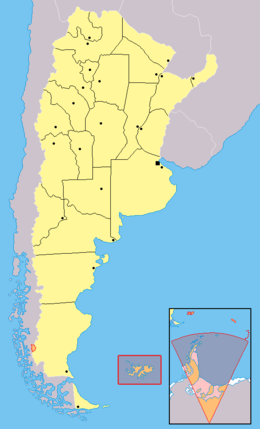 Argentina is almost 3,700 km long from north to south, and 1,400 km from east to west (maximum values). It can be divided into three parts: the Pampas in the central part of the country, Patagonia in the southern part down to Tierra del Fuego; and the Andes mountain range along the western border with Chile, with the highest point in the province of Mendoza. Cerro Aconcagua, at 6,960 metres (22,834 ft), is the Americas' highest mountain.

The most important rivers include the River Plate, Paraguay, Bermejo, Colorado, Uruguay and the largest river, the Paraná. River Plate was incorrectly translated though, and should have been translated to English as River of (the) Silver. River Plate is also a famous Buenos Aires soccer team.

The majority of the Argentineans are descendants of Europeans mainly from Spain, Italy, Germany, Ireland, France, other Europeans countries and Mestizo representing more than 90% of the total population of the country.[14] More than 300,000 Roma gypsies live in Argentina. Since the 1990s, Romanian, Brazilian and Colombian gypsies arrived in Argentina.[15]

Football or soccer is the most popular sport, although the national sport of the country is Pato. Argentina has a number of highly ranked Polo players. Field hockey (for women) rugby and golf are also favorites.

Argentina is a Christian country. Most of Argentina's people (80 percent) are Roman Catholic. Argentina also has the largest population of Jewish community after Israel and US. Middle Eastern immigrants who were Muslims converted to Catholicism, but there are still Muslims as well.

Medicine is socialized and so is education, making Argentina's literacy rate about 98%. State University is free as well.