A drawing of a furry character, a fox with human hair and eyes.
"Furry" is also a word for something covered in fur.

A fursona is a fictional (make-believe) animal character who has human traits. It can walk on two legs or talk.

People who like this art are also called furries. This group make up the furry fandom. Another word for furry is anthropomorphic, which means "people-like."

Many different stories have furry characters. Fairy tales and mythology often have animal characters who talk or do other human things. Books, comics, children's books, video games, and toys can have furry characters too. Some of the most popular cartoon characters are furries: Bugs Bunny, Mickey Mouse, Donald Duck, Disney's Robin Hood, and Scooby-Doo.

To be a furry character, an animal needs to look or act like a human in some way. Here are some of the ways:

Because humans have been around animals for a long time, humans expect certain animals to act certain ways. Art that gives humans animal traits tells people what to expect from those characters. For example, many cultures see foxes as clever, so many people will assume a fox furry character is clever.

Many video games also have furry characters. Some of these are: Jak and Daxter, Ratchet and Clank, Sonic the Hedgehog, Star Fox 64, and The Elder Scrolls IV: Oblivion.

In the modern day, people from all around the world make up the furry fandom. Many of them meet and talk to each other the Internet, but they also meet in real life. Furry websites like FurAffinity and DeviantArt let people share pictures, stories, music, games, and animations that have furry characters.

Fans of furry characters sometimes make up a furry character to represent themselves. This is called a "fursona." Often, the fursona's species is that person's favorite animal. These people sometimes talk to each other while pretending to be their fursonas. This is called a "role-play," because each person is playing a role, like in a television show or stage play. These role-plays usually happen over instant messaging or forums, but sometimes happen in real life.

People who like furry art sometimes meet to talk about their favorite characters, buy books or art, and show off their costumes. These meetings may also have music, dancing, and parties. Conventions are usually held in large hotels, so there is enough room for hundreds or even thousands of people. 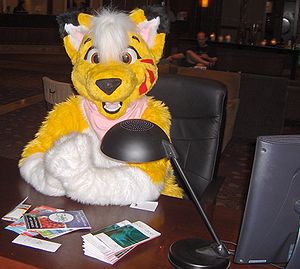 A fursuit at Anthrocon, the world's largest furry gathering.

Fursuits and other costumes

Fursuits are almost always one-of-a-kind. This is because they are often based a specific fursona and usually made one at a time. Some are made by the person who will wear them, others are made by artists who make them for money.

People usually wear fursuits for fun. Sometimes people feel less shy in a fursuit because no one can see who they are. This can make them feel more comfortable dancing, playing, cuddling, meeting people, or being silly. People may also wear fursuits to be a mascot for a charity or event, usually one related to animals.

Inside a fursuit, it can be difficult to see and hear. Fursuiters often have a friend help them cross traffic or use stairs. In hot weather, fursuiters must be careful not to overheat.

Slang in the furry fandom

Like many groups, the furry fandom has its own slang. "Murr" is a word used to show you like something or find it attractive sexually. "Scritching" is gentle scratching; in the furry fandom, this is a way to show you like someone, like hugging. "Yiff" is a slang word for sex. A "fursuit" is a costume that looks like a furry character. A "fursona" is a furry character someone makes up for himself or herself. "Anthro" is short for anthropomorphic (human-like) and can mean either a furry character (example: "an anthro bear") or the genre (example: "anthro art"). The word “snoot” is slang for snout.

Some people in the furry fandom find that attraction to furry characters or people in fursuits is an important part of their sexuality, and some do not. In one survey 37%,[source?] some people answered that it was important to their sexuality, while 24% said that it was not. Other surveys said that only a small minority of people in furry fandom say that they are sexually attracted to animals.