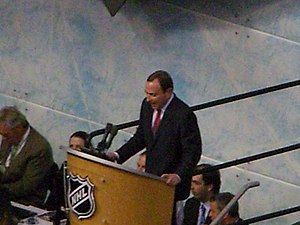 Gary Bettman at the 2008 NHL Entry Draft in Ottawa

Gary Bettman (born June 2 1952) is the current commissioner of the National Hockey League. He has held this post since February 1 1993. He is unpopular among many hockey fans, who are still angry over the lockout a few years ago. He has become even more unpopular for leading the league into another lockout in September 2012.