The digestive system is the parts of the body that digest food; it is also called the gastrointestinal system. It breaks down food into simple chemicals which can be absorbed into the blood stream. From the blood stream, nutrients go first to the liver, which is a kind of chemical factory for the body. The liver adjusts the nutrients so that the mix is what the body needs. The digestive system consists of gastric acid (hydrochloric acid, potassium chloride, and sodium chloride), which is very reactive and has a pH level of 1.5 to 3.5. The stomach has a protective layer called the mucus.

The food you eat gets chewed first. After that it travels down the oesophagus and lands in your stomach were gastric juices break down the food into mush. Then it travels into the small intestine were all the minerals and most of the water gets absorbed. Finally it end up in the large intestine and all the salt and excess water gets absorbed and comes out the anus as feaces (poo).

The digestive system also gets rid of waste material. The gastrointestinal system starts at the lips and ends at the anus. Animals like worms, insects, mammals, birds, fish, and people all have digestive systems.

The gastrointestinal tract is not only the gut, but also other organs that help us digest food. For example, digestive enzymes are needed to help us absorb carbohydrates and meat. 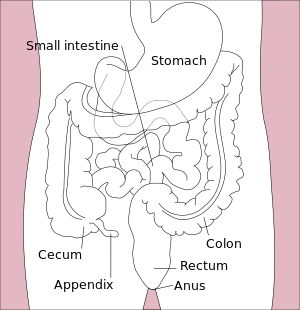 Parts of the gut

The parts of the human, and many other animals, digestive system are:

Food does not go through these organs. But they help the gut digest the food. They also have other work. For example, the pancreas, thyroid, liver, and parathyroids are also endocrine glands that make hormones like insulin.