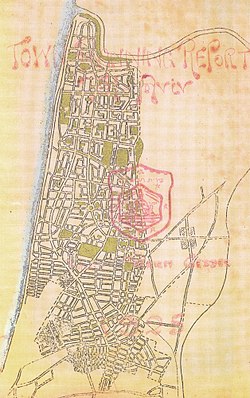 The Geddes Plan for Tel Aviv was the first master city plan for Tel Aviv. It was designed in 1925-1929 by the Scottish city planner Sir Patrick Geddes. This program designed the center of Tel Aviv and the area now known as "Old North".

In 1925 Patrick Geddes was commissioned to design a master plan for the city of Tel Aviv. The plan he produced was accepted in 1929. Tel Aviv turned out to be the only example of one of Geddes’ plans being built largely as he envisaged and is a good example of an early planned city. The area of Tel Aviv originally planned by Geddes makes up approximately 7.5% of the current day municipality of Tel Aviv and is now known as Tel Aviv’s “Old North”. It was designed to be an extension of the much older neighboring Arabic port town Jaffa to the south and a home for the increasing population of Jews emigrating from other parts of the world (predominantly Eastern Europe).[1]

Features and principles of Geddes Plan

Geddes, originally as biologist and sociologist was engaged to design a plan for the new city of Tel Aviv to be built adjacent to the ancient port town of Jaffa. The principles he employed for the city were strikingly similar to what we now know as New Urbanism ideas of planning - an emphasis was placed on pedestrians as opposed to motor car traffic, a sense of community and civic life was encouraged through the use of town squares and abundant planting of greenery provided significant focus on a minimal environmental footprint. Private automobile traffic was minimised and the city was envisaged on a pedestrian-scale. This neighborhood identity has been crucial in the success of Tel Aviv as a city.[2]

Another important aspect of Geddes plan was the use of the “super block,” which was popular in the early to mid 20th century with its origins in the modernist movement. The main principles was to create extra large blocks bounded by major rather than minor roads, and have them threaded with narrow one way streets designed in such a way to discourage through traffic. The aim of these superblocks was to foster community and a sense of civic life within them. In order to achieved this it was planned that at the centre of each block was meant to be a central public space (a garden or public building). In reality the commercial factors resulted in few of these central squares being captured for public use.[3]

Geddes took part of his inspiration from the Garden City movement developed by Ebenezer Howard, he was keen to ensure that greenery was an integral part of the Tel Aviv landscame. To this end, under his plan buildings were restricted to taking up a maximum of only one third of any given site, these restrictions aimed to ensure maximum potential for neighborhoods well endowed with lush greenery.[4]

Geddes did not prescribe a certain architectural style for the area, traditionally a city planned of along the lines of the British Garden City Movement would aim for an architectural style based on the traditional style for the region. Geddes recognised that the majority of the population he was designing for would be immigrants from Europe and other parts of the world. He encouraged the development of a distinctly ‘Jewish style’.[5] Interestingly Geddes provide little more that this style recommendations in his planning report.

Over the following decades after Geddes plan was realised the area began to decay and theer was significant public lament and dissatisfaction with the decay of the city. This deterioration was later used as justification for the rapid redevelopment of the area in the 1950s. However it was noted that this disapproval of the decay of the city quickly changed to nostalgia when old buildings began being razed to make way for new development. Resultantly significant effort was made to preserve the historical neighborhoods planned by Geddes and in 1984 the Council for the Preservation of buildings and Sites was established to protect them.[6]

Critics of Tel Aviv’s layout have suggested it is not a beautiful city in the classic sense. A low standard of construction and of housing units (apartment buildings) has largely been blamed for this, citing that the buildings developed were ugly and akin to stacks of packing cases with shoeboxes for balconies.[1]

Further criticism has been put that the city has not coped well with the increasing population and private car traffic not envisaged by Geddes at the time. Poor building construction and lack of proper maintenances have served as further critiques of the early city planning.[7]

Notwithstanding these criticisms of Geddes planning of Tel Aviv, while not immune to the modern problems of traffic and development that all cities today face, Tel Aviv is widely regarded as a successful city and symbol of modern day Israel.