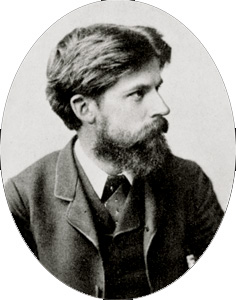 Sir Patrick Geddes (2 October 1854 – 17 April 1932) was a Scottish biologist, sociologist, geographer, philanthropist and pioneering town planner. He developed a new urban theoris, including the second master plan of Jerusalem in 1919. He also developed the first master plan of Tel Aviv in 1925 that included the Bauhaus architecture in the White City of Tel Aviv. His other work was in India during the period of British India. A small memorial board to Patrick Geddes is under a bridge of the Heil HaShirion Street in Tel Aviv.