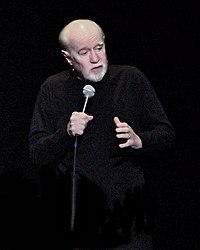 Carlin was born and raised on Manhattan, New York City. He was famous for making a list of curse words that people should not say in the media, or even in public. (The list was ironically adopted by many radio stations, as a guide to what kind of language was not allowed.) As a stand-up performer, he had been called one of the greatest of his genre by the television network Comedy Central.

He acted in movies such as Jersey Girl, Dogma, Bill and Ted's Excellent Adventure (and its sequel), Scary Movie 3, and Disney's Tarzan 2.

Carlin had a history of heart problems and had suffered several heart attacks. He died of heart failure in Santa Monica, California at age 71.