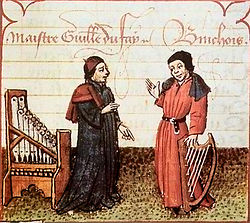 Gilles Binchois (probably born in Mons about 1400; died Soignies, 20 September, 1460), was a Franco-Flemish composer. His name is spelt in various ways: “Binchoys”, “Binch” or “Binche” or “Gilles de Bins”. He is one of the earliest composers of the group known as the Burgundian School. His style of composition had a very important influence on music at the Burgundian court. Together with Guillaume Dufay and John Dunstaple he belongs to the greatest of 15th century composers.

He was probably born in Mons in what is now Belgium. His father, a councillor to Duke Guillaume IV of Hainault, had a job in a church in Mons. Nothing is known about Gilles until 1419, when he became organist at the church of Ste. Waudru in Mons. In 1423 went to live in Lille. He may have worked as a soldier.

Sometime near the end of the 1420s he joined the court chapel of Burgundy. He sang with the choir there. He spent many years working at the Burgundian court. He was not allowed much time to be away, so he did not travel much. We know that he went to Mons in 1449 on which occasion he met Guillaume Dufay. When he retired he went to live in Soignes. He had a good pension.

Binchois wrote beautiful melodies which were much simpler than a lot of the music of the Middle Ages. They are easy to sing and remember. Many later composers used melodies by Binchois as a basis for their own masses. Most of his songs are rondeaux, which became the most common song form during the century. Binchois did not often write in strophic form. He preferred to write music which did not follow the rhyming rhythm of the verse.