Coat of arms of Mons. 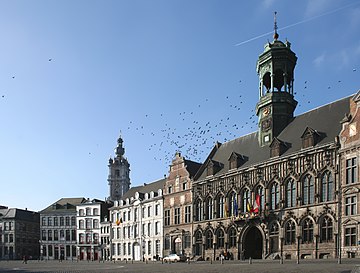 The "Grand-Place" and town hall of Mons with its belfry in the background.

Mons is a town in Belgium and the capital of the Province of Hainaut. It is the fourth largest city of the Walloon part of Belgium where French is spoken. The town's name takes its roots from the Latin word mons which means mountain. In 2015, the city becomes the European Capital of Culture for the calendar year.