Hainaut (Walloon: Hinnot; Dutch: Henegouwen; German: Hennegau) is a province of the Walloon Region, one of the three regions of Belgium. Its capital is the city of Mons.

It is the westernmost province of the Walloon Region.

The province of Hainaut is divided into seven arrondissements (arrondissementen in Dutch) with 69 municipalities.

The province of Hainaut is divided into seven arrondissements (Ath, Charleroi, Mons, Mouscron, Soignies, Thuin and Tournai) and a total of 69 municipalities. 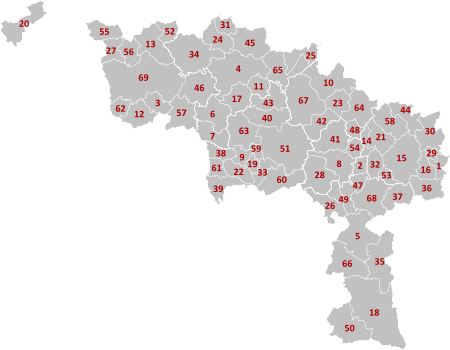 Population on 1 January of each year.[2]