Harper Lee (April 28, 1926 - February 19, 2016) was an American writer. She was born in Monroeville, Alabama. She was most famous for writing To Kill a Mockingbird. That book was published in 1959. Civil rights issues in Alabama influenced her writing. Harper Lee's interests apart from writing were watching politicians and cats, travelling and being alone.[1]

Throughout her life, Lee had said that she would never publish another novel. However, in 2015, Lee announced Go Set a Watchman, a sequel to To Kill A Mockingbird.

Lee died on February 19, 2016, in a retirement facility in Monroeville, Alabama from complications of a stroke at the age of 89.[2] 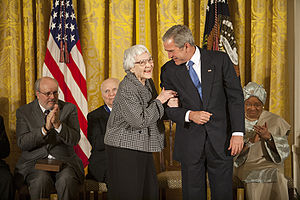 On November 5, 2007, in the East Room, Harper Lee was recognized with the Presidential Medal of Freedom by President George W. Bush. She received this recognition because of her career best book "To Kill a Mockingbird" that influenced many people in the country for good.
In 1926, Harper Lee was born in the Monroeville, Alabama. She was the youngest child out of three children. Her father was a law expert and part of the Alabama State lawmaking body. Her mother had trouble with mental illness. The class before first grade, she made a friend named Truman Capote who also later become a fiction writer, short-story writer, and wrote plays.[3] So when they were young, she used to act the scene again that was part of the well known book Rover Boys with her friend Truman.[4]

Harper Lee went to the Monroe County High School in Monroeville. She used to take part in many activities at school, and was part of Glee Club and literary honorary "society". She went to the all-female Huntingdon College in Montgomery following her sister who became a law expert. Later, Lee changed the school to the University of Alabama and started to learn about the law. But she wasn’t really interested in the things that she was learning. Though she was really interested in her studies and her writings. Lee wrote amusing, and funny school magazines that came out regularly, Rammer Jammer and became its editor. "For one year," she went to Oxford University as a student who studies outside his or her home country. But still, Lee didn’t like the law. Her father was giving money for her education but Lee thought that she needed to be self-supporting. So she dropped out of the University and moved to New York to do what she loved.[5]

Her interest in a book inspired Lee to write many long stories. Lee wrote many to write few longer stories, Lee moved to New York to chase after a career as a writer. Hohoff, the editor of To Kill a Mockingbird convinced Lee to write a new novel from the point of view of Scout as a child. Two years later,it became "To Kill a Mockingbird."Harper Lee works impressed many companies. She went to many schools and her interest in literature got her to write many novels. Her novels became popular. Harper Lee also worked with Truman Capote as he inspired her to become an author.[6]

Harper Lee died from a stroke at the age of 89, just seven months after the release of Go Set a Watchman, the controversial sequel To Kill a Mockingbird. She died in her sleep from a stroke in 2007, she died peacefully, Lee's oldest nephew and family spokesperson, said in a statement on Friday:"This is a sad day for our family. She has touched people known her as a devoted friend and family member." She signed the will eight days before her death. Her books have touched many people heart,"To Kill a Mockingbird" was published in the autumn. Her funeral was on February 20th. It was held at First United Methodist Church in Monroeville. She was a beloved author. Her books have touched many people heart. It was a sad day when she passed away.[7]