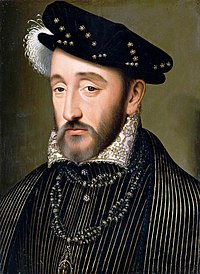 Henry was born in Saint-Germain-en-Laye, France, on March 31, 1519. His parents were Francis I of France and Claude of France.

Henry was married to Catherine of Medici on October 28, 1533 when he was only 14 years old. Their children were:

Henry did not love Catherine of Medici. He spent most of his time with his mistress, who was called Diane de Poitiers.

Henry died on July 10, 1559 after a jousting accident. He is buried in the Saint Denis Basilica. The next King was Francis II of France.