Hijab means a barrier, or a cover, and refers to the idea of modesty and behavior, among other things. Men must veil their eyes from stranger women and women must veil their beauty from stranger men. In the contemporary world, a hijab is seen as the veil and the headscarf,(although that is not what the hijab means) worn by Muslim women and girls as a symbol of modesty 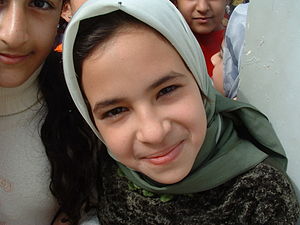 An Iraqi girl wearing a headscarf

The word is used in particular to refer to clothing which covers a woman's chest, head and hair. This is often done in Islam for females over the age of puberty.[1][2] The headscarf, a symbol of hijab, is worn in the presence of adult males outside their immediate family. It is not necessary when females or males are within their immediate family.

The Arabic word used to specifically mean this is "khimār" (خمار). This "veil" can come in several different types, such as an ordinary veil (which only covers the head), a niqab, a burka which covers the entire body, and any form of covering used to veil. There are many styles to wear. Muslim men must also observe standards of modest dress.

The Quran has no requirement that women cover their faces with a veil, or cover their bodies with the full-body burqa or chador.[3]