KidzSearch Safe Wikipedia for Kids.
Jump to: navigation, search
This article is about the liquid created by insects. For other uses, see Honeydew (disambiguation). 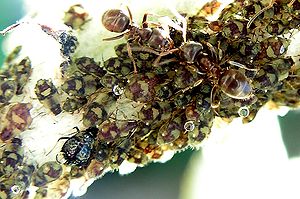 Honeydew is a liquid sugar that aphids and some scale insects make when they eat plant sap. Honeydew is very sticky.

Honeydew on plants can cause sooty mould, which is white and appears as powder on the plant.

Honeydew is collected by some insects, such as some wasps and bees. Some honey bees make honeydew into a dark, strong honey, called honeydew honey. Honeydew honey is valuable in parts of Europe and Asia because people think it can be used as a medicine.