The Hoopoe (Upupa epops), is a colourful bird that is found across Afro-Eurasia, notable for its distinctive 'crown' of feathers.

It is the only living species in the family Upupidae. One insular species, the Giant Hoopoe of Saint Helena, is recently extinct, and the Madagascar subspecies of the Hoopoe is sometimes elevated to a full species. The English name is derived from Latin upupa, which imitates the cry of the bird.

The Hoopoe is classified in the Coraciiformes clade, a group that also includes kingfishers, bee-eaters, rollers, and woodhoopoes (forming a clade with this one according to Hackett et al. (2008)[1]). A close relationship between the Hoopoe and the woodhoopoes is also supported by the shared and unique nature of their stapes.[2] 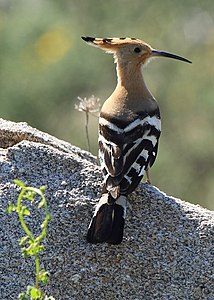 Upupa epops, on a cherry tree.

Nine subspecies of Hoopoe are recognised by the Kristin 2001 (in the Handbook of the Birds of the World). These subspecies vary mostly in size and the depth of colour in the plumage. Two more subspecies have been proposed, U. e. minor in South Africa and U. e. orientalis in north western India.