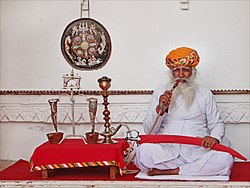 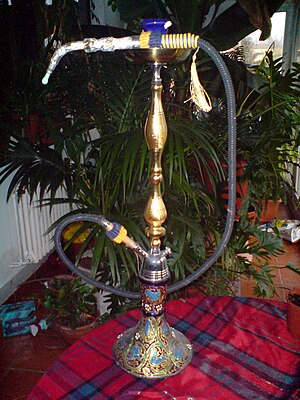 A hookah is a type of glass water pipe used to smoke tobacco, or special hookah-tobacco called "shisha". It can also be used for smoking herbal fruits.

The hookah gained popularity under the reign of the Ottoman Dynasty.[1][2] A hookah operates by water filtration and indirect heat.

The more colloquial terms "hubble-bubble" and "hubbly-bubbly" may be used in the region surrounding the Red Sea.

The archaic form of this latter Indian name hookah is most commonly used in English for historical reasons. It was in India that many English-speakers first sampled the effects of the water pipe. The writer William Hickey wrote in his Memoirs that shortly after his arrival in Calcutta (now Kolkata), India in 1775:

The jar at the bottom of the hookah is filled with water sufficient to submerge a few inches of the body tube, which is sealed tightly to it. Deeper water will only increase the inhalation force needed to use it. Tobacco or tobacco-free molasses are placed inside the bowl at the top of the hookah. Often the bowl is covered with perforated tin foil or a metal screen and coal placed on top. The foil or screen separates the coal and the tobacco, which minimizes inhalation of coal ash with the smoke and reduces the temperature the tobacco is exposed to, in order to prevent burning the tobacco directly.

The hookah in modern times

Hookahs are widely used today. At parties, some people choose to smoke a hookah and spread it around for others to use. Hookah bars are places where people can meet up and smoke hookahs. Nowadays, hookahs appear in numerous designs, shapes, and sizes, from classic Egyptian look to modern and futuristic[4].

A 2005 WHO report states that smoking using a waterpipe poses a serious potential health hazard and is not a safe alternative to cigarette smoking. The average hookah session typically lasts more than 40 minutes, and consists of 50 to 200 inhalations that each range from 0.15 to 0.50 liters of smoke. In an hour-long smoking session of hookah, users consume about 100 to 200 times the volume of smoke of a cigarette.