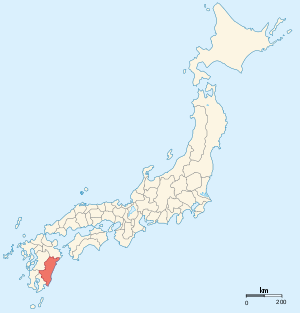 Hyūga Province (日向国, Hyūga no kuni?) was an old province of Japan in the area of Miyazaki Prefecture on the island of Kyūshū.[1] It was sometimes called Nisshū (日州?) or Kōshū (向州?).

Hyūga had borders with Bungo, Higo, Ōsumi, and Satsuma Province.

The ancient capital city of the province was near Saito.

In Kojiki and Nihon Shoki, Hyūga is called Kumaso Province (熊曽国, Kumaso no kuni?) in Tsukushi-no-shima, with Tsukushi, Toyo and Hi Province.

In the Meiji period, the provinces of Japan were converted into prefectures. Maps of Japan and Hyūga Province were reformed in the 1870s.[3]

Tsuno jinja was the chief Shinto shrine (ichinomiya) of Hyūga.[4]