Bungo Province (豊後国, Bungo no kuni?) was an old province of Japan in the area of Ōita Prefecture on the island of Kyūshū.[1] Along with Buzen Province, it was sometimes called Hōshū (豊州?).

In the Meiji period, the provinces of Japan were converted into prefectures. Maps of Japan and Bungo Province were reformed in the 1870s.[2] 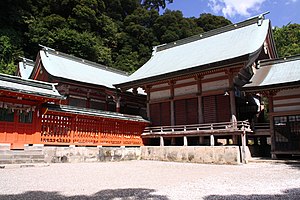