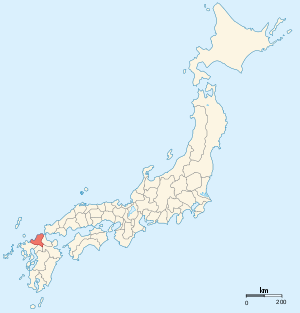 Chikuzen had borders with Buzen, Bungo, Chikugo, and Hizen Provinces.

The ancient capital city of the province was near Dazaifu.

At the end of the 13th century, Chikuzen was the landing point for a Mongol invasion force. But the main force was destroyed by a typhoon which was later called kamikaze.

In the Meiji period, the provinces of Japan were converted into prefectures. Maps of Japan and Chikuzen Province were reformed in the 1870s.[2]

Sumiyoshi-jinja and Hakosagi-gū were the chief Shinto shrines (ichinomiya) of Chikuzen.[3]