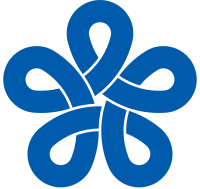 Script error: No such module "Nihongo". is a prefecture in the Kyūshū region of Japan on the island of Kyūshū.[1] The capital city is Fukuoka.[2]

The area of Fukuoka Prefecture includes the old provinces of Chikugo, Chikuzen, and Buzen.[3]

Fukuoka Prefecture faces the sea on three sides. The prefecture borders Saga, Ōita, and Kumamoto prefectures. Fukuoka is near Yamaguchi Prefecture across the Kanmon Straits.

Fukuoka includes the two largest cities on Kyūshū, Fukuoka and Kitakyūshū. Small islands are near the north coast of the prefecture.

There are 28 cities in the prefecture:

National Parks are established in about 18% of the total land area of the prefecture.[6]